IS YOUR HOME OVER 20 YEARS OLD?

Then it’s probably time to replace its wooden fascia. Call Blackstar Aluminum — our experts will visit your home, give you a prompt estimate, and install new fascia as needed.

IS YOUR HOME READY FOR NEW FASCIA BOARDS?

Replacement of fascia is normal when a home approaches 20 years of age, but sometimes it’s needed earlier — if there’s rot due to bad gutter installation, for example. Call Blackstar Aluminum for a complete inspection by our specialists.

HOW LONG WILL MY SOFFIT AND FASCIA LAST?

DO I NEED TO CLEAN MY SOFFITS AND FASCIA?

WHAT HAPPENS IF I HAVE A PROBLEM WITH MY SOFFIT AND FASCIA? 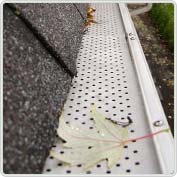 And unlike your car hood, the surface beneath the wet leaves on your gutter is perforated so they dry faster!

A little wind is all it takes to sweep away dry leaves and debris : 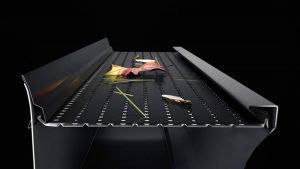 Our new product, Double Pro Microfiltreation Continuous Hanger is a solution for your pine needles problem. Alu-Rex is the world pioneer, using two perforated aluminum membranes in a gutter guard. The second membrane is able to block access to tapered debris such as pine needles which are often the cause of major obstruction while allowing the viscous substances that cause trouble to flow when the perforations are too fine.

Learn more about Double Pro Microfiltreation Continuous Hanger and ask for an estimate!

HOW DO ALU-REX PRODUCTS STAND UP TO SNOW?

Alu-Rex products significantly reduce the weight of snow on your gutters. Since the snow can’t get into the gutters, the weight they have to carry is limited to that which accumulates on top of Alu-Rex products.

What’s more, the gutters remain fully functional so water from melting snow and ice can drain away freely.

HOW TO PREVENT ICE DAMS IN YOUR GUTTER SYSTEM?

Over the course of a full Canadian winter, ice and snow buildups inside a home’s eavestroughs can range from light snow drifts to thick and compact ice blocks, putting the integrity of the whole system in jeopardy.

PROTECT YOUR EAVESTROUGHS, AND HAVE A WORRY-FREE WINTER
To avoid any problems, it is imperative that you make sure your attic is well insulated, so that the snow covering your roof doesn’t melt prematurely. A house that isn’t well insulated allows heat to escape easily, which can cause melted snow to form ice dams in the eavestroughs. This can lead to various issues, not to mention that it can damage downpipes, fascia boards, and the gutter system itself, mainly because of the immense excess weight put on the structure.

The installation of the Alu-Rex Gutter Clean System or the T-Rex continuous hanger helps prevent these types of problems, and allows your gutter system to function properly all year round. Alu-Rex products keep debris outside of eavestroughs, allowing melted snow to drain freely.

In case of emergency, there are a few quick solutions that homeowners can use to get rid of excessive ice and snow accumulations: apply a thin layer of Ice Melter salt right on top of the ice dam to help it melt quicker and relieve some of the stress put on the eavestrough. Using caution, you can also try to chip away chunks of the ice buildups with an ice pick and hammer.

As we know, prevention is better than cure. Before the start of winter, make sure that your roof is in good condition and that your attic provides sufficient insulation from the cold. Your eavestroughs will thank you for it!

CAN INSTALLATION OF ALU-REX PRODUCTS LEAD TO LEAKS IN MY ROOF?

No. Alu-Rex products do not cause any leaks. No shingles are raised and no nails or screws go into the roof during installation.

Beware of look-alike products that require you to lift the shingles. These products can lead to leaks. In time, the asphalt shingles dry out and become brittle. It’s never a good idea to lift shingles when installing gutter protections systems, whether they’re nailed in, screwed on, or simply set in place.

Also, the manufacturer’s warranty on asphalt shingles is void if the shingles are lifted, peeled away, or modified.

WHAT IS THE MAXIMUM WEIGHT MY GUTTER CAN SUPPORT WHEN FASTENED WITH THE T-REX SYSTEM?

The maximum weight your gutter can bear with T-Rex is 250 lb. per linear foot (373 kg per linear metre). That’s 50% stronger than with spikes or hangers.

WHAT IS THE POINT OF USING T-REX IF THERE ARE NO TREES NEAR MY HOME?

It may seem unnecessary to use the T-Rex continuous gutter fastening system if there are no trees around your home. But T-Rex’s main strengths are its robustness, strength, durability, and quality.

WHY IS THE T-REX CONTINUOUS FASTENING SYSTEM BETTER THAN SPIKES, SCREWS, AND HANGERS?

Spikes, screws, and hangers provide a certain degree of strength, but only over a few inches to either side of them. The spaces between the spikes/screws/hangers are weak.

The Gutter Clean System® is a gutter protection system that prevents leaves and debris from getting in and clogging the existing gutters. This product is simply placed on your home’s existing gutters.

T-Rex is a continuous fastening system for new gutters that very securely fastens gutters to your home, making them 50% stronger than traditional systems.

The Gutter Clean System® and T-Rex are among the most efficient gutter protection systems on the market today.

In the vast majority of cases, a light breeze is enough to sweep away normal debris. In areas under the roof or under shallow overhangs on sloped roofs, debris may build up where the wind cannot reach it.

We recommend that you occasionally clean out these areas to keep your Alu-Rex products in good working order.

HOW DOES WATER GET INTO THE EAVESTROUGH? THERE AREN'T ENOUGH HOLES AND THEY'RE TOO SMALL.

Our exclusive Alu-Rex performace gutter cover technology is the result of extensive research and development. The product has 624 holes every 24 inches (61 cm). This allows water to drain at the same rate as a 2 in. x 3 in. (5 cm x 7.5 cm) downspout. Rigorous testing by an independent certification agency has proven that Alu-Rex gutter cover can drain over 29,7 in. (755 mm) of water an hour over a length of 20 feet (6 m). And with 44,000,000 feet (13,411,200 metres) of Alu-Rex products installed around the world, the figures speak for themselves…

Note: The highest amount of rainfall ever recorded worldwide was 12 in. (305 mm) of water in one hour (Holt, MO, 1947). In comparison, the 1996 Saguenay Flood in Quebec was triggered by 11 in. (275 mm) of rain in three days. Alu-Rex products would have been able to handle all that rain in just one hour-and three times more!

Overflow is usually caused by the eavestroughs themselves (not wide enough or deep enough for the roof surface) or the downspouts (insufficient number for the roof’s surface). It is important to make sure there are enough downspouts to avoid this problem. For this purpose, you need to keep in mind that one downspout is enough to drain the equivalent of a 600 sq. ft. (56 m2) roof.

In short, if you don’t have backflow problems with your current eavestroughs in heavy rainfalls, the Gutter Clean System and T-Rex won’t create them.

Even if all the perforations get covered-which never happens because the wind sweeps away leaves and debris-Alu-Rex eavestrough fastening system and eavestrough cover leaf guard can drain up to three times the quantity of water ever recorded in the heaviest rainstorm.

How? Because wet leaves remain permeable. Water still gets between the leaves-and even through them-to drain into the eavestrough. The water always finds its way into the holes.

What’s more, the exclusive design of Alu-Rex products features an approximately half inch (1 cm) deep basin. Testing in the lab and in the field has shown this to be the right depth to catch more water without stopping the wind from doing its job of sweeping away leaves, pine needles, and debris from the surface.

Beware of look-alike products that are completely flat. Water can overflow when products are not equipped with a basin.

2. ARE THE PERFORATIONS SMALLER THAN THE T-REX CONTINUOUS HANGER?
A: No, they’re the exact same size. You look thinner when you wear black—it’s the same visual effect for perforations on a black product.

3. DOES THIS PRODUCT HAVE FEWER PERFORATIONS THAN THE T-REX CONTINUOUS HANGER?
A: No, we simply combine two perforation lines into one, so there are more holes on one line and a larger gap between perforation lines.

4. DOES THIS PRODUCT DRAIN ENOUGH WATER?
A: It drains the same amount of water as the current T-Rex Continuous Hanger which is to say 29.7″/hour—more than twice the highest recorded rainfall (12.3″/hour). Since the second layer has a larger open surface, it doesn’t reduce the overall intake.

5. WILL THERE BE CLOGGING BETWEEN THE TWO LAYERS?
A: No. The second layer is only meant to block direct access to some debris like pine needles and is designed to be continuously washed by rainfall. The space between holes is small enough to prevent dirt from piling up.

6. WILL SNOW AND ICE BUILD UP BETWEEN THE LAYERS?
A: Although a thin layer of ice is possible on the second layer, the large holes will prevent any major buildup in between. Tested in a freezer in different buildup conditions (all at once and progressive freezing) and through two full winters in Canada, the two layers always kept their shape.

7. IS THIS PRODUCT OVER-DESIGNED?
A: The dual-action system may seem complex, but it’s fairly simple to understand: the Alu-Rex design team found that a system with two layers of aluminum was the most maintenance-reducing system that could be manufactured. The DoublePro reduces gutter clogging to a minimum and also minimizes guard clogging by letting debris normally evacuated by the gutter system move through its porous membranes.

Learn more about Double Pro Microfiltreation Continuous Hanger and ask for an estimate!

Have A Question about Eavestroughs?

How to choose the right gutter protection